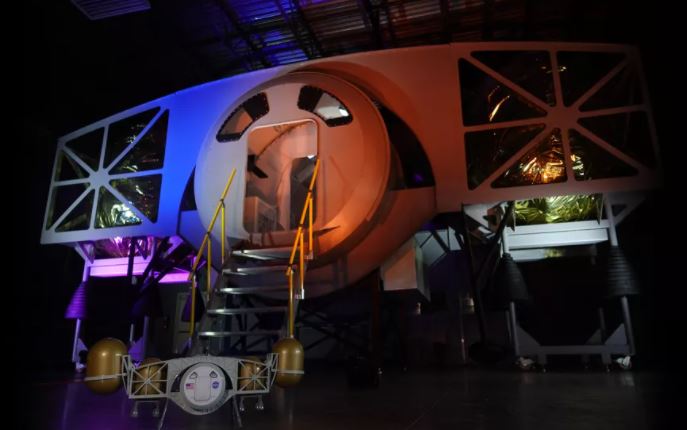 Dynetics, a Huntsville, Ala.-based developer of space systems and technologies, has developed a full-scale mock-up of the lander it hopes will carry astronauts to the Moon. The prototype includes a crew module, deployable solar arrays and propellant tanks for lunar descent and ascent.

“Our team is pleased to bring this system to life,” Kim Doering, Dynetics vice president of space systems, said in a statement. “Our reusable, sustainable approach is ready to support a safe and successful hardware delivery for NASA’s mission.”

Dynetics is one of three prime contractors selected to design an integrated lander system for NASA’s Artemis Human Landing System Program, which has set the goal of returning humans to the Moon by 2024.

The prototype will enable the development team to test crew activities within the module. Explains the company; “The flexible design is readily reconfigurable, allowing the human systems integration team and flight crew to review and provide feedback on early concept designs and executive quick-turn iterations.”

NASA has selected Astrobotic to deliver a water-hunting robot to the Moon’s surface in late 2023, the company has announced. The 13-year-old Pittsburgh company was awarded a $200 million fixed-price contract to build and test a lander spacecraft that can transport NASA’s 1,000-pound robotic rover, VIPER, to the Moon.

The Griffin lunar lander is Astrobotic’s medium capacity lander product line, and is capable of delivering up to 500 kg of mass to the lunar surface.

Said Astrobotic CEO John Thornton: “Astrobotic’s lunar logistics services were created to open a new era on the Moon. Delivering VIPER to look for water and setting the stage for the first human crew since Apollo embodies our mission as a company.”

Only three countries — the U.S., the former Soviet Union, and China — have developed vehicles capable of a soft landing on the Moon.  NASA hasn’t sent such a mission with either humans or robots since the Apollo program. The plan is for VIPER to spend 100 days on the Moon searching for water ice.

It’s encouraging to see how far NASA has come in its thinking.

My only gripe: NASA still sees planting an outpost on the Moon primarily as a stepping stone to Mars rather than the first stage in full-scale lunar colonization as an adjunct to exploiting cislunar space. Mars may have scientific value, but it has no strategic value. The Moon offers both. 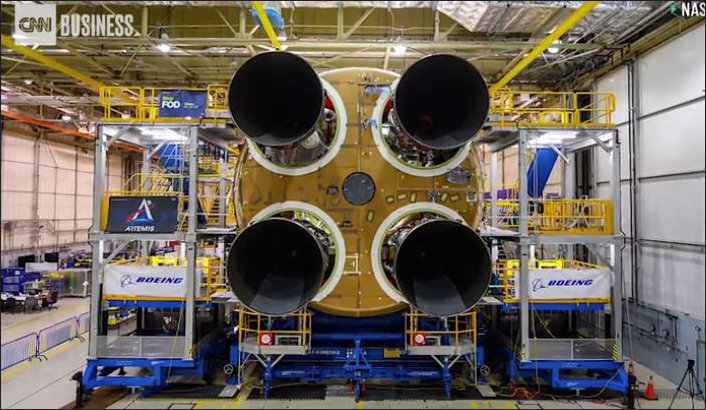 NASA is under contract with Boeing to build two SLS rockets with the goal of putting astronauts back on the Moon by 2024: specifically, landing the next man and woman on the south pole of the Moon, after which it will need a third rocket, and perhaps more.

CNN Business asked a pertinent question: How much will the rockets cost?

When we think about the cost of an SLS rocket per launch, it really, quite frankly, depends upon how many we buy in a certain package. If you buy one SLS rocket, it’s going to be very expensive. I’d say on the order of $1.6 billion. If we buy multiple SLS rockets, say as many as ten, or twelve, it can get down under a billion dollars, $800 million per copy. But, look, these are all estimates at this point. NASA needs to sit down with its prime contractor Boeing to negotiate the best solution to the right mix to the number of rockets and the cost per rocket.

Bridenstine added that he would like to have a cadre of astronauts dedicated to the Artemis project. “I want the astronauts that we send to the Moon this time to be like the Mercury Seven where the astronauts have names and faces and backgrounds and histories and personalities.”

According to Science Alert, the SLS is the tallest rocket stage NASA has built since the Saturn V stages for the Apollo missions. It is also the most powerful, designed to reach a speed of Mach 23 before separating from its upper stage, the Orion crew capsule.

The project has suffered by delays and cost overruns. The first flight was scheduled for November 2018, and the price tag has risen from $6.2 billion to $8 billion. NASA has spent roughly $34 billion on the SLS, Orion, and the Exploration Ground Systems Program through 2018, a sum that is projected to increase to more than $50 billion by 2024.

Dr. Michael Hawes, vice president and Orion program manager for Lockheed Martin Space Systems Company, sees the settlement of the Moon as a proving ground for the ultimate goal of reaching Mars and conducting other deep-space explorations.

The first destination is the Moon, he said at a luncheon hosted by the Webster Business alliance Wednesday, as reported by the Houston Chronicle. “NASA talks about the space around the moon as being the proving ground.” But the ultimate goal is Mars. Said Hawes:

“That’s the horizon goal of deep space exploration. We want to get to Mars but we have to learn how to do a lot of things along the way, Just as we built capability from Mercury through Gemini to Apollo to demonstrate the a lunar landing, we have to do a lot of demonstration of a much broader sense than we did back then to get to Mars. We’re going to do that building from the moon out.”

“We may build a small station on the far side of the moon. We could do science from there. We can actually see the sun and the earth so we could still get power and communications. We’ll go out and look at asteroids. NASA has an asteroid re-direct mission that they’re looking to define that would take a robotics spacecraft to go get a large boulder off an asteroid and bring it back into orbit around the moon. Then, Orion would take the crew out to do the research on the asteroid on that mission.”