The European Space Agency (ESA) has issued a call for ideas for creating a network of lunar telecommunications and navigation satellites. The Moonlight initiative would allow dozens of planned lunar missions to share the same infrastructure to communicate with Earth and find their way to the lunar surface, according to an ESA press release republished in GPS World.

Two consortia of companies have completed their concept reviews, which set out their business and technical analysis of a lunar network. The next step will defining a detailed system architecture and identifying the most suitable partnership models between private space companies and ESA.

Scientists have identified a topographical phenomenon on the lunar surface: bright swirls resembling cream being stirred into coffee. The features, which range in size from a few meters across to more than 50 kilometers, are found across from the Moon. Summarizes NewScientist: “We don’t know what causes [the swirls], but a new analysis has discovered surprising hints that they are found where the ground is lower.” 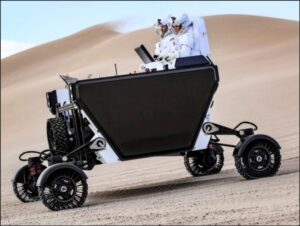 “When we settle somewhere,” he added, “we don’t just need to get people from one place to another, but we need to move hardware, cargo, life support equipment and more.” END_OF_DOCUMENT_TOKEN_TO_BE_REPLACED

Double-shadowed craters near the Moon’s south pole may be so dark that they would be among the coldest places in the solar system. The small tilt of the Moon as it orbits the Earth, only 1.5 degrees, means that it has hundreds of craters where direct sunlight never reaches. Double-shadowed craters make it impossible for even reflected sunlight to touch some areas. Temperatures can drop below  -170°C.

NewScientist has the story behind a paywall.

Some critics warn that the intrusion of the armed forces into cislunar space represents a potential usurpation of NASA and militarization of space. Military strategists say the stakes are too big to leave cislunar space to the civilians, and the Pentagon will be compelled to take on a major role. China, which has plans to build a lunar base, cannot be trusted to pursue only peaceful aims, and could use its space program for both economic and military advantage, Politico says. END_OF_DOCUMENT_TOKEN_TO_BE_REPLACED 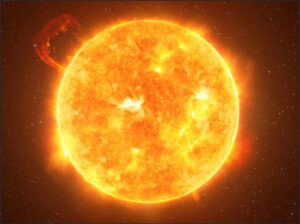 The Moon is dotted with steep-walled holes known as pits, or skylights, which likely lead to sub-surface lava tubes that could serve as sheltered underground environments for human settlers. Engineers are developing specialized robots to explore these hard-to-access topographical features.

The trick is designing these vehicles to be compatible with small landers, making them capable of negotiating steep pit aprons, and equipping them to acquire cross-pit images. A team led by William “Red” Whittaker, a robotics professor at Carnegie Mellon University, has developed the PitRanger, a 33-pound mini-robot outfitted with a solar panel and an adjustable telephoto camera and tested it in a massive sinkhole in Utah.

Whittaker explains his challenge to Space.com:

“The scenario is to rove to a pit with a micro-rover, peer into the pit, acquire images of walls, floors, caverns, and then generate pit models,” Autonomy for fast exploration is the critical technology since the small, solar-powered rovers won’t be able to carry direct-to-Earth radio for supervision or guidance.

In addition, “the rover must succeed in a single illumination period” on the moon, because it needs the sun for energy and heating. (A lunar day lasts about 14 Earth days, and the lunar night is equally long.) “It only has 12 days, not 12 years, to complete its mission.”

The rover would circumnavigate the rim, identify the overlooks offering the required, and deploy a tiltable camera to obtain the required angles needed to create a high-fidelity, 3D-quality image, The result will be far superior to anything that a Moon-circling satellite could capture.

Not only do pits provide potential habitats, they are windows into lunar geology. Scientists expect to gain insights into volcanology, morphology and much more, Wittaker said.

As China invests in its space program, scientists have identified helium-3 (He-3), an ideal fuel for nuclear fusion reactors, as a major subject of interest.

According to CGTN, a Chinese English-language news source, Chinese scientists say the Earth possesses roughly 30 kilograms (about 66 pounds) of the helium isotope. Deposited by solar wind, the substance is abundant on the Moon’s surface — about a million metric tons. That’s enough to power the Earth for a thousand years.

Extracting He-3 from the lunar regolith does pose a challenge. The material would have to be heated to about 600 degrees Celsius before being extracted, packaged and transported back to Earth.

“There seems to be another wave of interest of going to the moon, both by the United States and China and there may be other countries as well,” said University of Wisconsin engineering professor Gerald Kulcinski. “And most of these programs have, as part of their goal, harvesting helium-3 for terrestrial use.”

“The biggest problem is that everyone is targeting the same sites and resources: states, private companies, everyone. But they are limited sites and resources,” says Tony Milligan, a co-author and senior researcher with the Cosmological Visionaries project at King’s College London. “We don’t have a second moon to move on to. This is all we have to work with.” END_OF_DOCUMENT_TOKEN_TO_BE_REPLACED

Building the base. Planners expect to make extensive use of 3D printing. Experiments on Earth with imitation regolith have shown that it is possible to build large structures with the technology. However, it remains to be seen how well the process will work in the Moon’s light gravitational field. END_OF_DOCUMENT_TOKEN_TO_BE_REPLACED