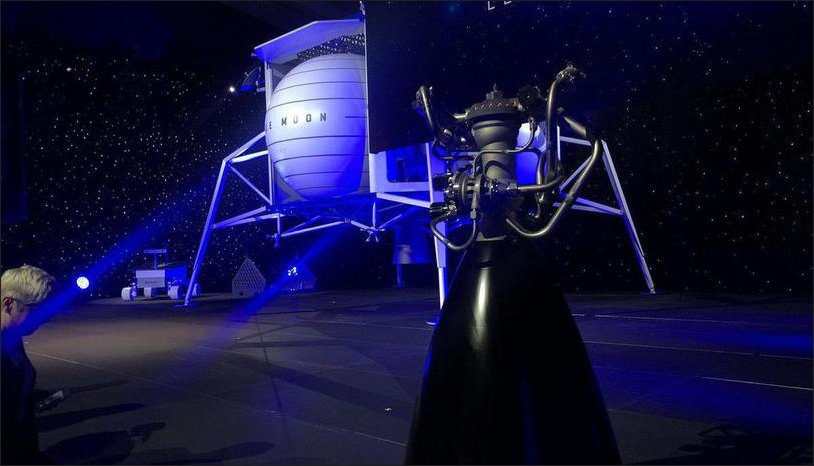 Jeff Bezos, founder of Blue Origin, unveiled a lunar land last week that he said will transport equipment and possibly human beings to the south pole of the Moon by 2024.

In a a presentation in the state of Washington, Bezos said the lander can transport 3.6 metric tons to the lunar surface. Under development for the past three years, the lander will be capable of carrying scientific instruments as well as rovers for exploration, reports Republic World.

Bezos also unveiled the company’s BE-7 rocket engine, which he declared will be test-fired soon. Many parts of engine were 3D printed.

Said Bezos: “We were given a gift — this nearby body called the moon. The moon is a good place to being manufacturing in space due to its lower gravity than the Earth. Getting resources from the moon takes 24 times less energy to get it off the surface compared to the Earth, and that is a huge lever.” END_OF_DOCUMENT_TOKEN_TO_BE_REPLACED

Among the key findings so far: END_OF_DOCUMENT_TOKEN_TO_BE_REPLACED 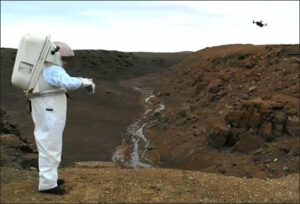 Collins Aerospace and Ntention, a Norwegian startup. are developing “smart gloves” that hopefully will allow astronauts to direct the movements of drones on the Moon and Mars.The collaborators recently conducted their first field test of the gloves at the Haughton-Mars Project Research Station in Canada’s high Arctic, reports Forbes.

The smart glove, embedded with a microcontroller and sensors, allows the the drone to respond to small motions of the fingers, hands, and head.

The vision behind the research project is to equip human explorers on the Moon with machines that can explore, scout, inspect, sample and fetch, reaching lunar caves, flying over mountains, or traversing terrain too tricky for humans to navigate.The robots might be equipped with appendages to do delicate work or bulk up to take on heavy lifting. END_OF_DOCUMENT_TOKEN_TO_BE_REPLACED

The SpaceTrex lab at Arizona State University is partnering with NASA to create a tiny satellite, called the CubeSat, designed to measure and locate water on the Moon in the Lunar Polar Hydrogen Mapper or “Luna-H Map” project.

The competition is intense to be included on mission payloads. CubeSats are small enough, writes Popular Science, that they can hitch rides on rockets with larger payloads and get released on their own trajectories to conduct their own science. The first official launch of NASA’s Space Launch System and Orion spacecraft, scheduled for 2018, will carry 11 separate CubeSat missions into deep space, including one that will measure the effects of space radiation on yeast. The spacecraft will drop off LunaH-Map potentially along with two other lunar CubeSats to settle the question of how much water there is on the Moon and where it is.

The question for lunar water has strategic significance that the other scientific endeavors, as interesting as they may be, do not have. As Popular Science notes, lunar water will fuel exploration deeper into the solar system.

Jekan Thanga, the head engineer on LunaH-Map, dreams of a lunar gas station for astronauts. “Just think, we could have a refueling station at the L2 point,” he says, referring to a point beyond the Moon where gravitation alignments would allow supplies in space to remain stationary. “Our astronauts could stop there to refuel and stock up on supplies before heading out to Mars, or Europa.”

Since 2000 more than 300 CubeSat missions have been deployed in Earth Orbit, including the Planetary Society’s LightSail this year.

Russia is pinning its hopes for lunar colonization on Luna 25, a probe set for launch in 2025 — making it the first Russian craft to land on the Moon since 1976. Luna 25 will pave the way for an even bigger coal, a crewed landing and lunar base, reports Spaceflight Insider.

The probe, also known as the Luna-Glob lander, will land in the Boguslavsky crater near the lunar south pole and analyze the region’s regoloth. Its four television cameras will take footage of the area. Another two cameras will observe the work of the probe’s digging tool. A radioisotope thermoelectric device will provide power by converting the heat generated by the decay of plutonium-238 isotope into electricity.

“This mission is a scientific-technological one. We want to carry out scientific experiments there, but this is a technological mission in the sense that we need to return to the Moon, learn how to land, and survive the lunar night, since a lot of what was achieved in the 1970s has been forgotten,” said Vladislav Tretyako, a researcher in nuclear planetology at the Russian Space Research institute. END_OF_DOCUMENT_TOKEN_TO_BE_REPLACED