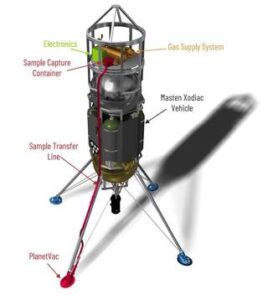 In an upcoming test flight, Metzger’s team will affix their Ejecta STORM sensor to a Zodiac vertical takeoff and landing system with simulated lunar soil placed beneath. The sensor will shine four lasers into the blowing dust cloud.

“When you do a lunar mission, you really get one chance — a period of about 30 seconds — to get the measurements you need,” he said. “So you don’t want to waste that. You have to do field testing to make sure you’ve validated all the different aspects of the sensor that you can.”

Dust collector. A second project, PlanetVac from Honeybee Rotobotics, will test a device that will use gas to initiate suction, transferring a surface sample through a tube, and depositing it in a container to be sent back to Earth for analysis. Previous testing proved the technology could collect more than 300 grams of simulated regolith. The new test will demonstrate the ability to transfer the sample to a container located several feet above the device.

Combining the two projects in the same flight will provide more data than either team would have had they flown solo. The university team’s measurements may help Honeybee better understand how much surface soil can be disturbed while still allowing for a sample dust collection.