Scientists who have modeled 4 billion years of the Moon’s meteor-impact history have concluded that the Moon holds more water than previously believed. Much of it is buried, as much as 10 meters deep.

“We looked at the entire time history of ice deposition on the Moon,” said Keven Cannon, a planetary scientist at the Colorado School of Mines and lead author of the study in Geophysical Research Letters. “If the coldest regions have been stable and accumulating ice for billions of years, then some could have very substantial deposits, but they might be buried up to 10 meters deep or more.”

As Cannon explains in this “plain language summary” of the study:

The polar regions of Earth’s Moon have topographic depressions that are never directly exposed to the Sun, so they are cold enough for deposits of ice to exist. Water can get into these regions by water‐bearing asteroids colliding with the Moon, or from lunar volcanoes erupting gases that travel to the poles. At the same time, large impact craters that form at the poles eject an enormous amount of soil and rock that could bury existing ice. It is not well understood how these two processes work together to build up deposits that may have alternating layers of ice‐rich and ice‐poor soil. In this study, we used computer simulations to predict what these layered deposits may look like. We found it is likely that large amounts of relatively pure ice are buried at depth in the oldest deposits, covered with thinner layers hosting less ice.

The team found that 49% of the ice was deposited in the first 100 million years and 96% within the first 500 million years. Ice accumulation fell off rapidly after that due to the decline in water-bearing meteorites over time. They project that the polar craters have a lower substratum with up to hundreds of meters of relatively pure ice, and an overlaying zone that was thinner with more heavily “gardened” ice and dry ejecta. 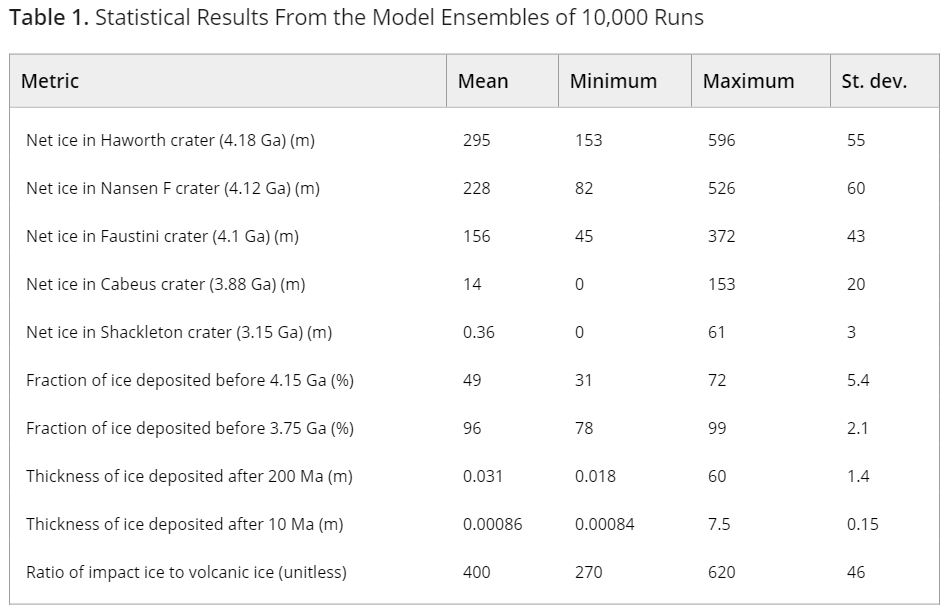