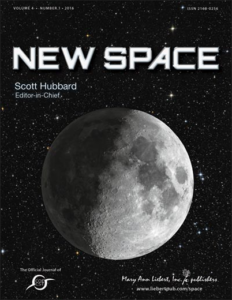 Drawing upon insights from a group of thought leaders and venture capitalists, a  paper published by “New Space” argue that a permanently inhabited lunar outpost could be established by the early 2020s at a cost $10 billion or less.

The paper, “Site Selection for Lunar Industrialization, Economic Development, and Settlement,” provides a preliminary treatment of the factors that would guide the optimum location for a commercially driven lunar settlement, which, in its initial phase, would house at least 10 people on extended tours.

Key parameters include: (1) power availability, (2) low-cost communications over wide areas,” (3) availability of water (or hydrogen-based molecules) and other resources, and (4) surface mobility.

The paper resides behind a paywall, but Popular Science provides a summary.

Power. The sun will be the primary source of power. The problem is that most lunar locations have 15-day nights, which creates a significant energy-storage problem. By the poles have nights lasting only four days or so. Therefore, the first lunar station will likely be located at one of the poles.

Communications. Communications will be easiest from the side of the Moon facing the Earth.But a relay station on the Moon or in orbit  could remedy the problem.

Terrain. Although the lunar north and south poles receive similar amounts of light, the paper deemed the north pole a preferable location for a settlement because it has smoother terrain that’s easier to travel across. In particular, the paper singles out the rim of Peary crater as being the best spot to develop a low-cost solar station. The crater likely contains water and has a smooth floor, making it easier for robots to traverse as they extract resources.

Commercial potential. Export options include water as a rocket fuel, precious metals from asteroid impact sites, Helium-3 as a nuclear fusion fuel, and even tourism. A study made last year, adds Popular Science, found that a Moon base could pay for itself by generating $40 billion rocket propellant per year.