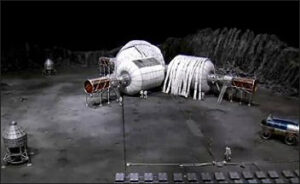 Mike Gold, director of D.C. operations at Bigelow, said that such a zone would be consistent with United States obligations under Article IX of the 1967 Outer Space Treaty, which requires states to ensure that their nationals’ activities and experiments do not interfere with the peaceful exploration and use of outer space by others.

Without property rights, any plan to engage the private sector in long-term beyond LEO activities will ultimately fail. Companies and their financial backers must know that they will be able to enjoy the fruits of their labor relative to activities conducted on the Moon or other celestial bodies, and own the property that they have surveyed, developed, and are realistically able to utilize,” Bigelow writes in [an internal NASA] report.

“(It is) nearly impossible at this time to identify exactly what activities will sustain commercial industry on the Moon, mining of resources such as Helium-3, mining rare earth elements, or leveraging fields of solar arrays for power generation are all possibilities.”

… Regardless of whether these ideas come to fruition or not, the granting of property rights could lead to substantial non-governmental funds being invested in space on the basis of the potential that exists for future development.